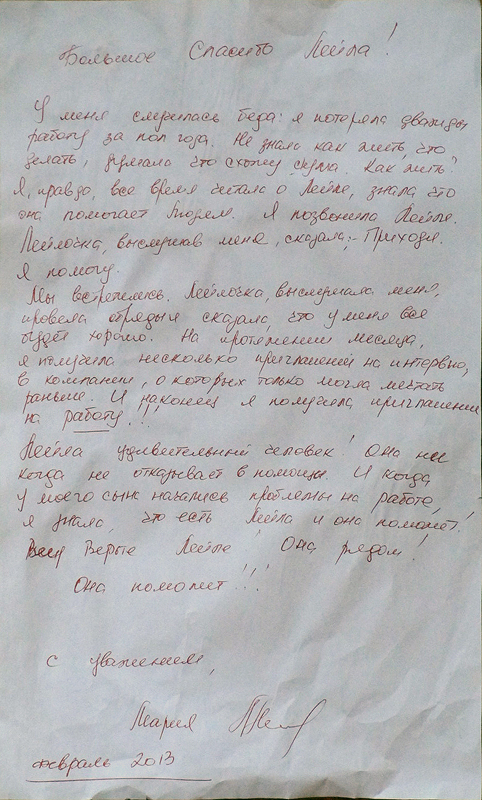 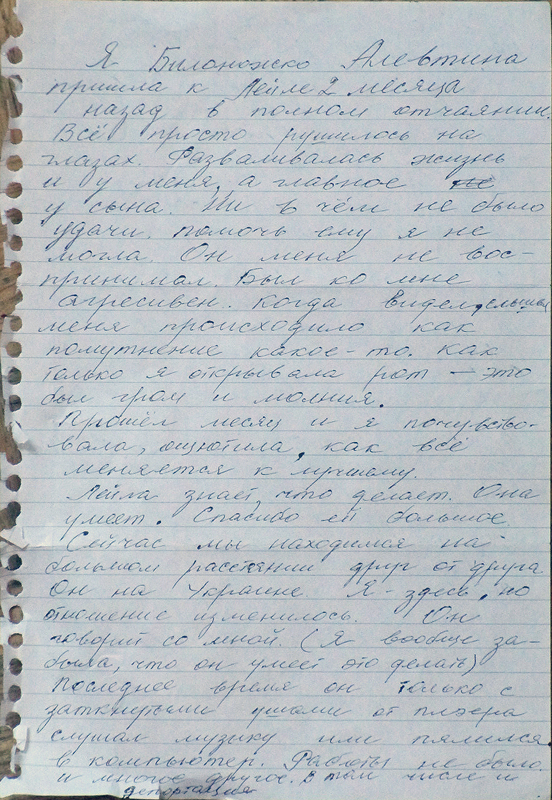 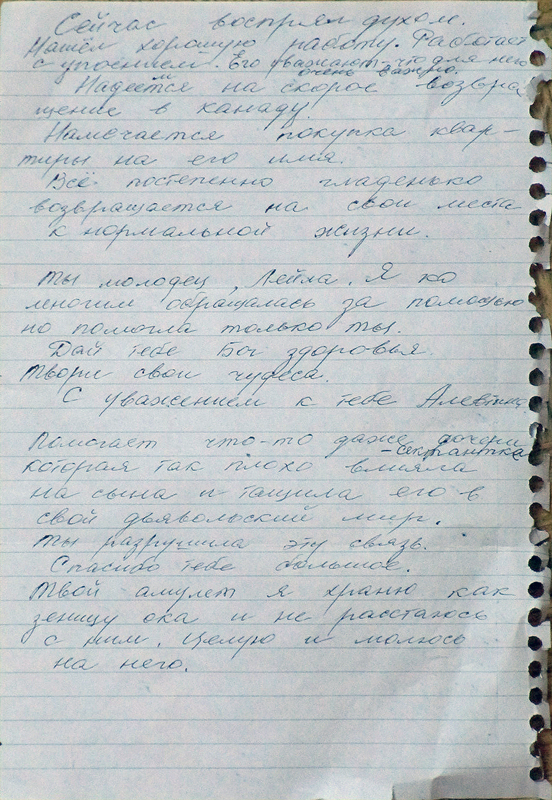 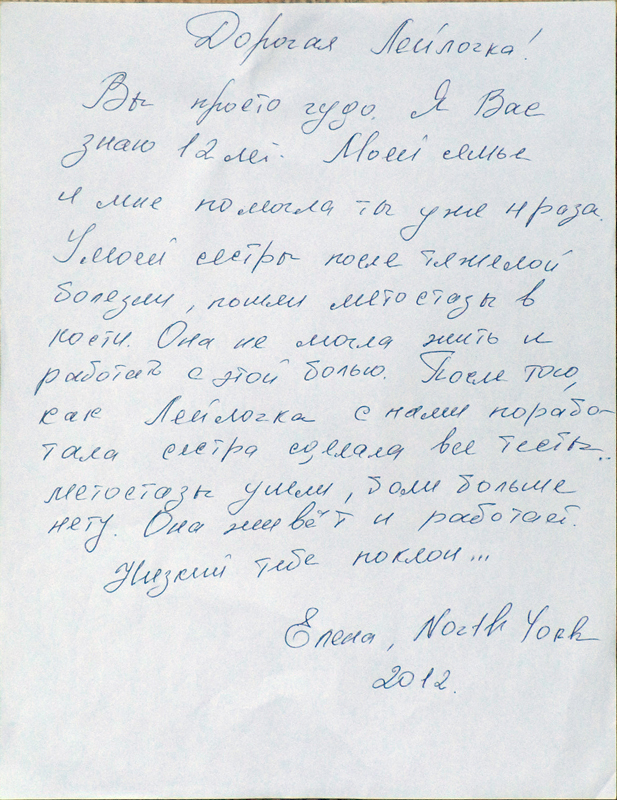 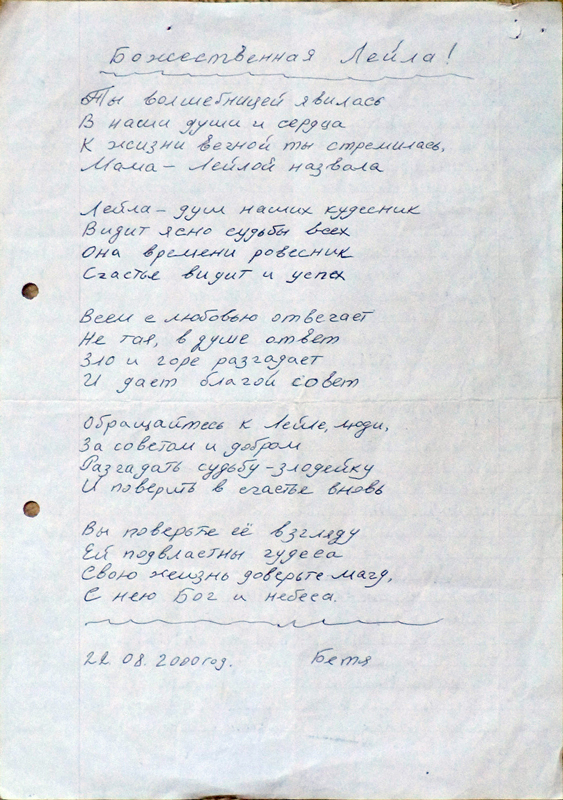 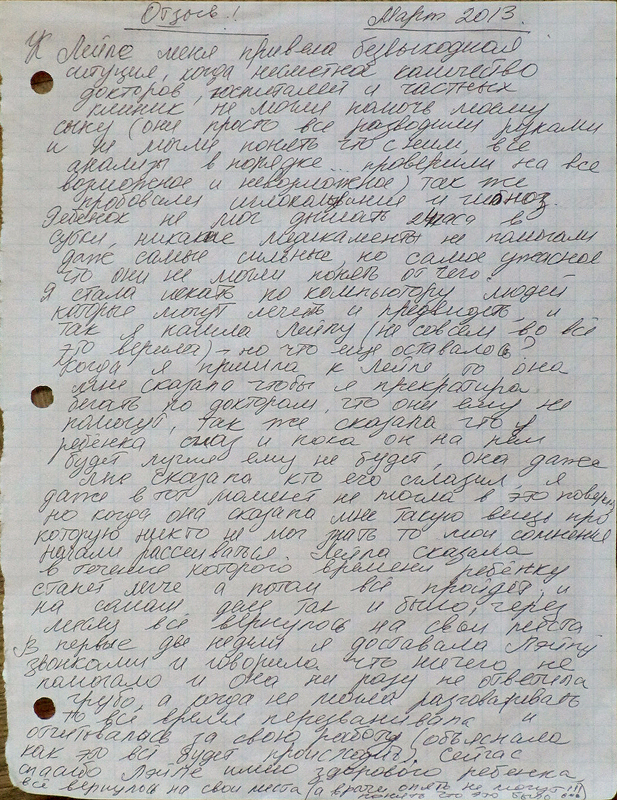 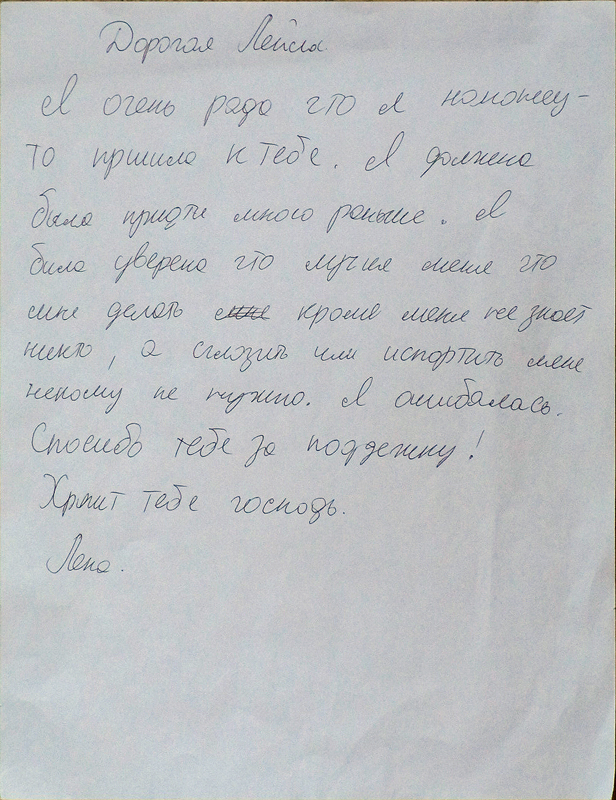 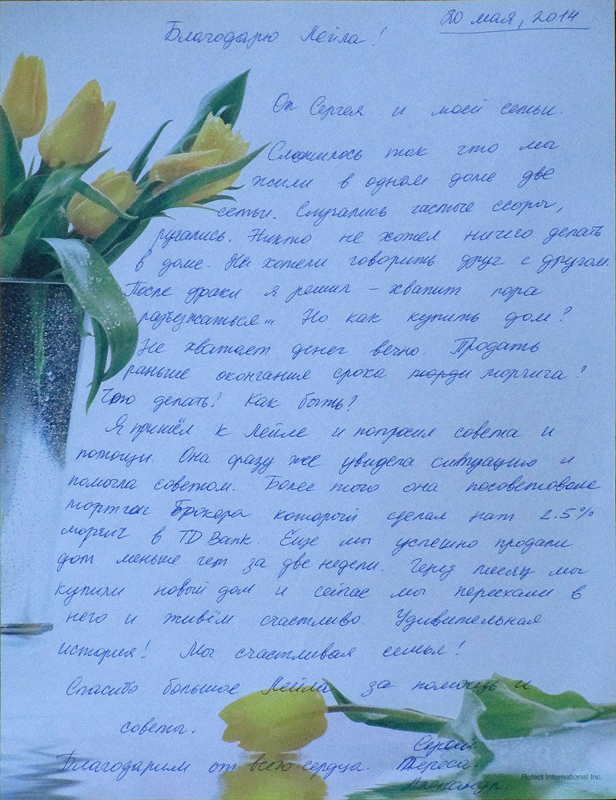 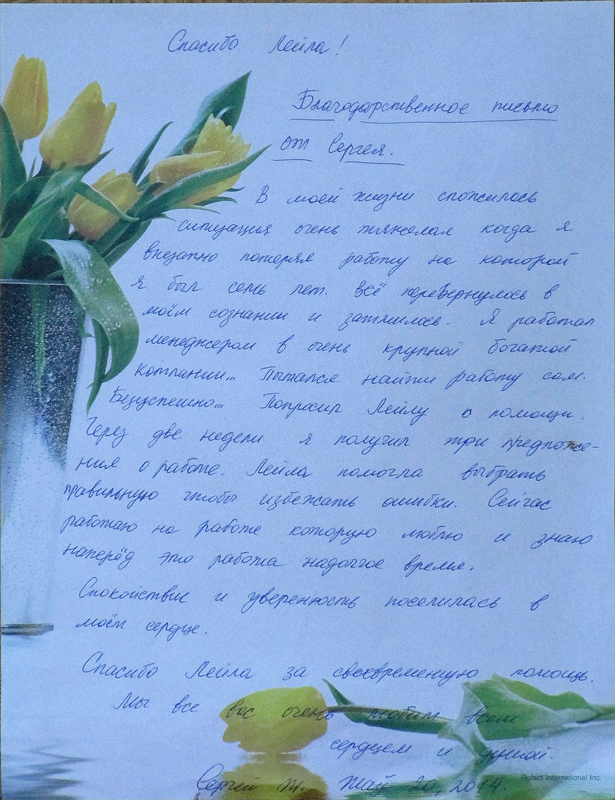 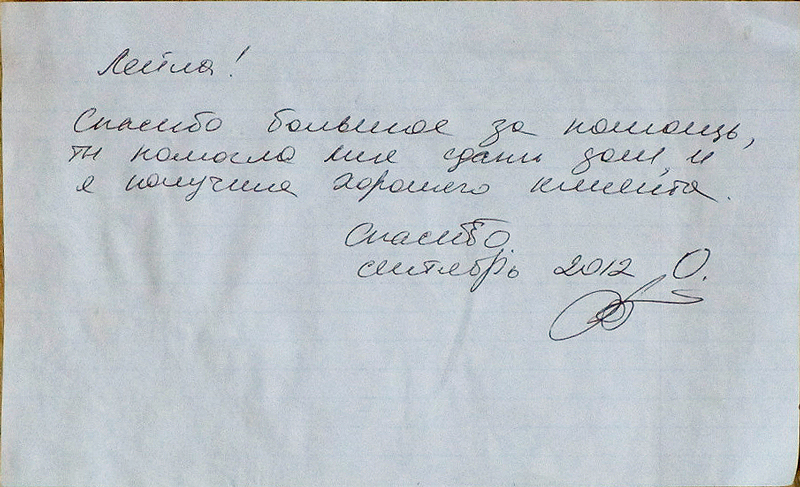 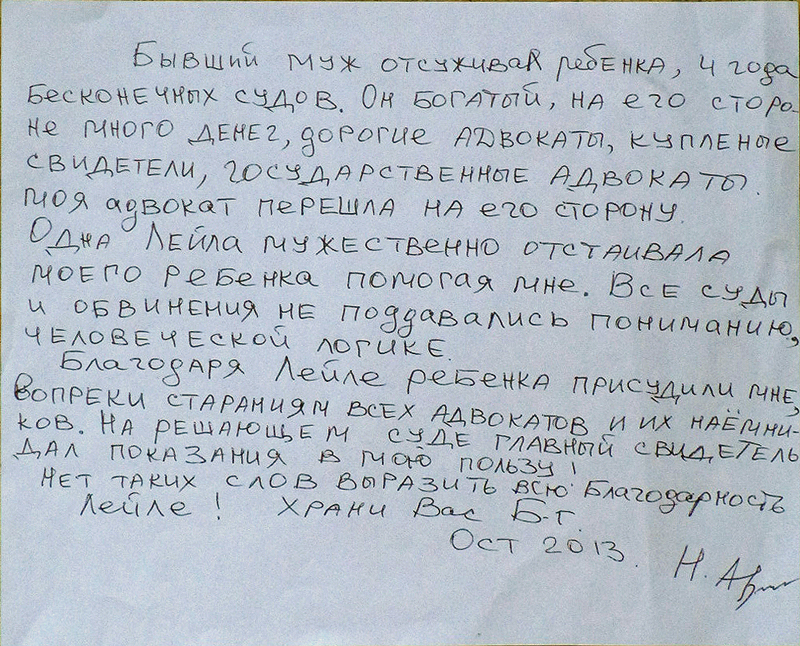 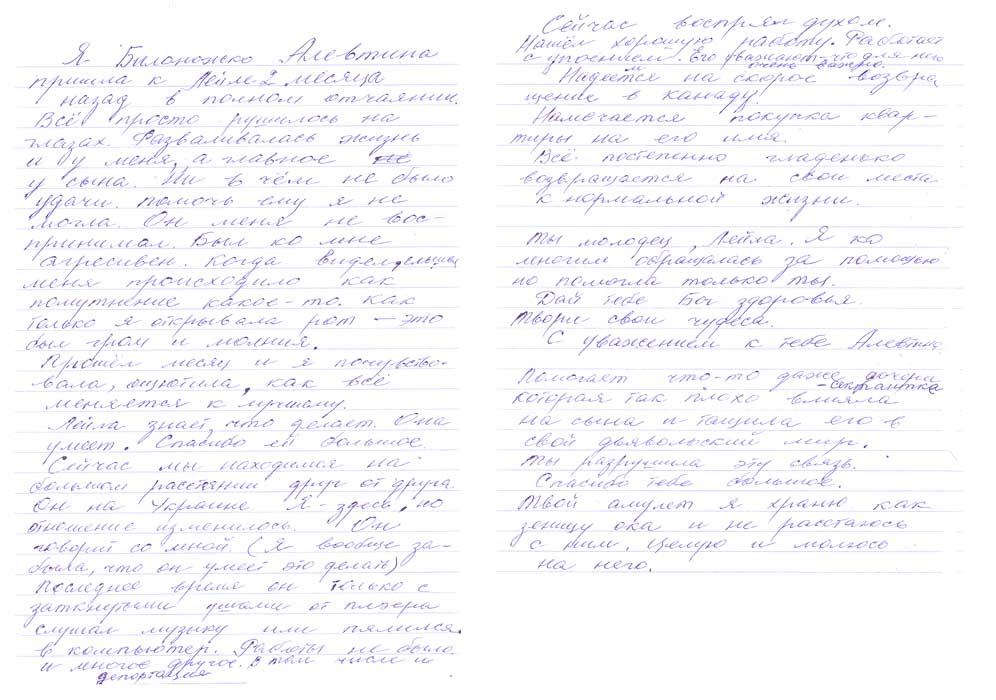 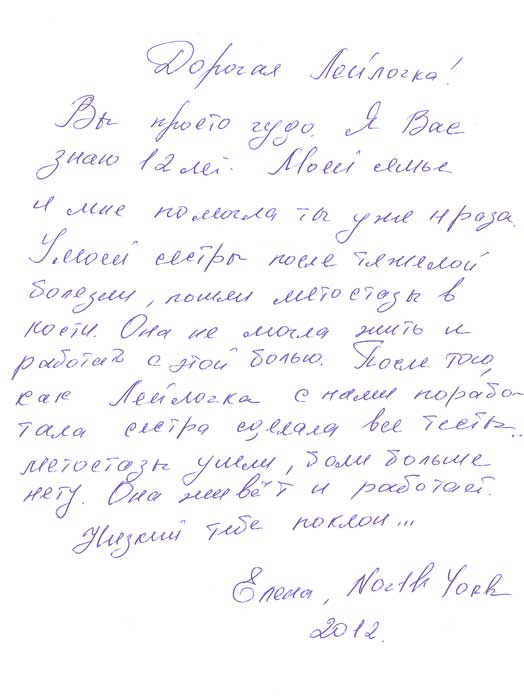 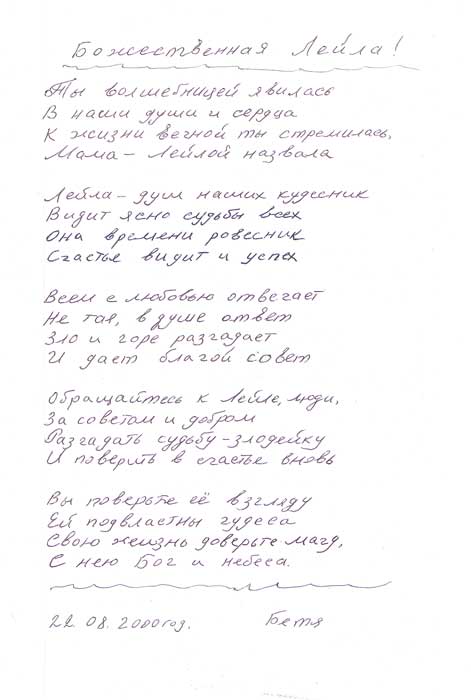 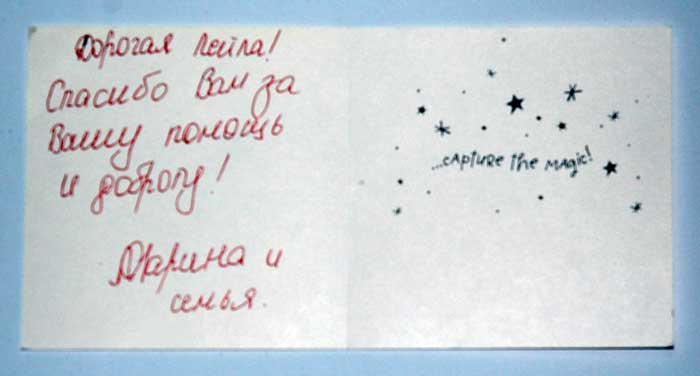 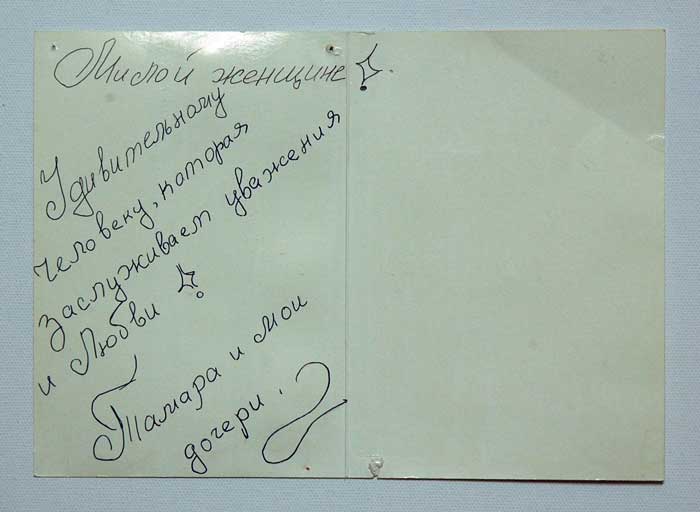 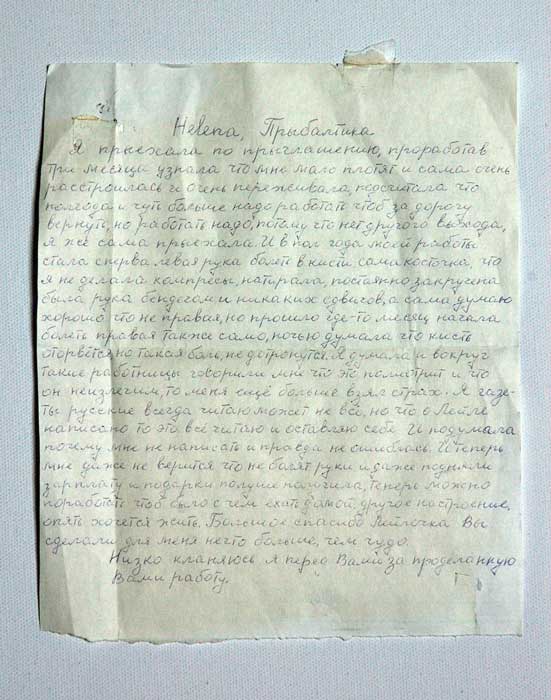 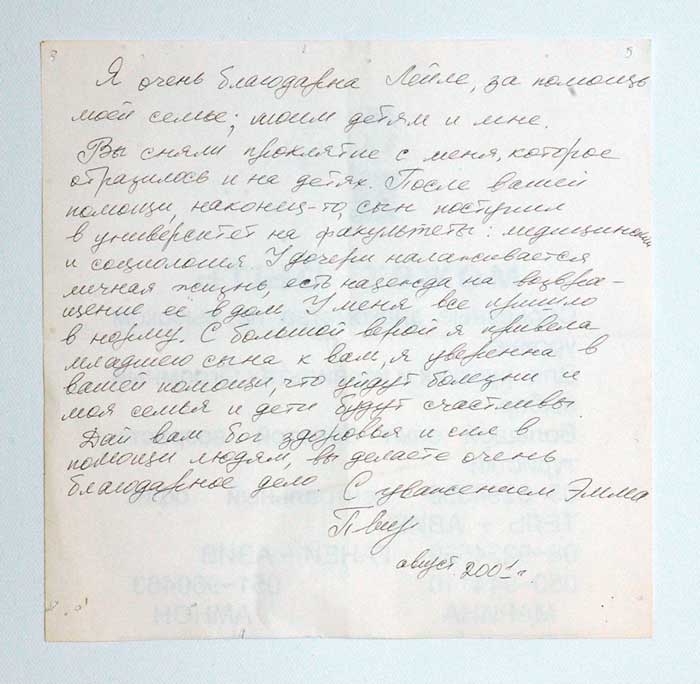 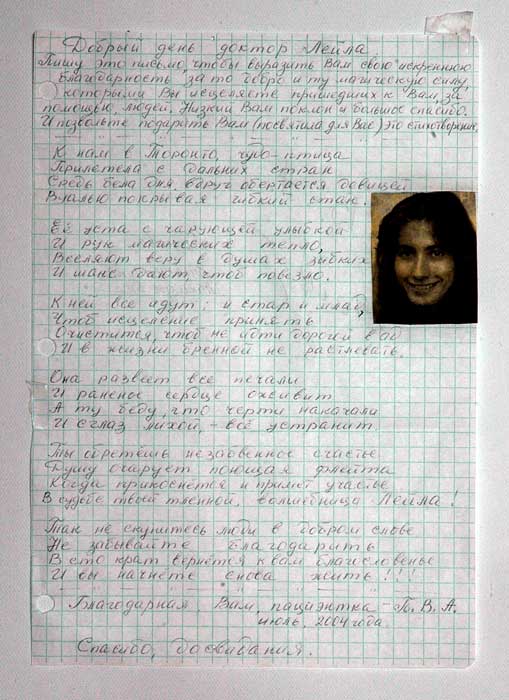 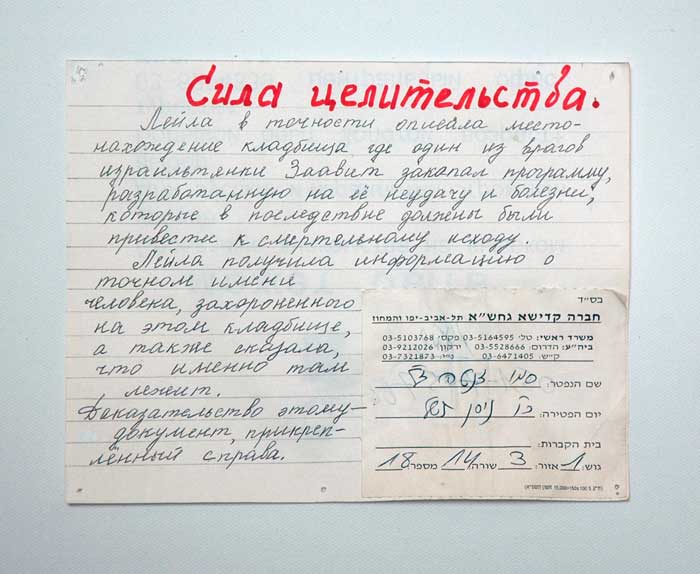 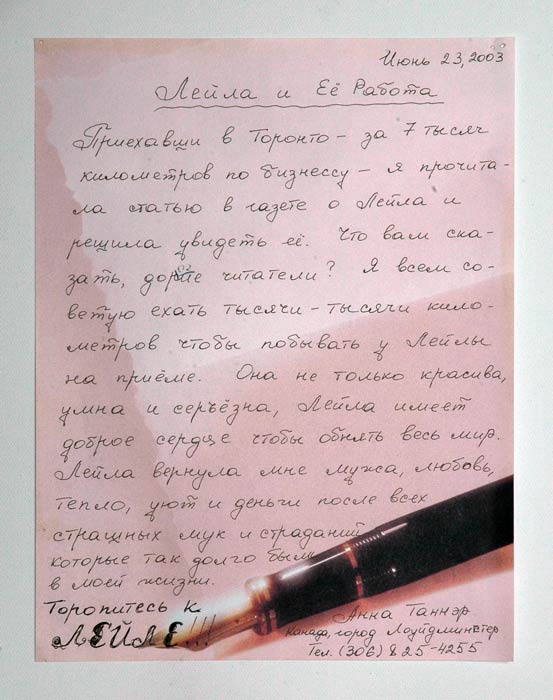 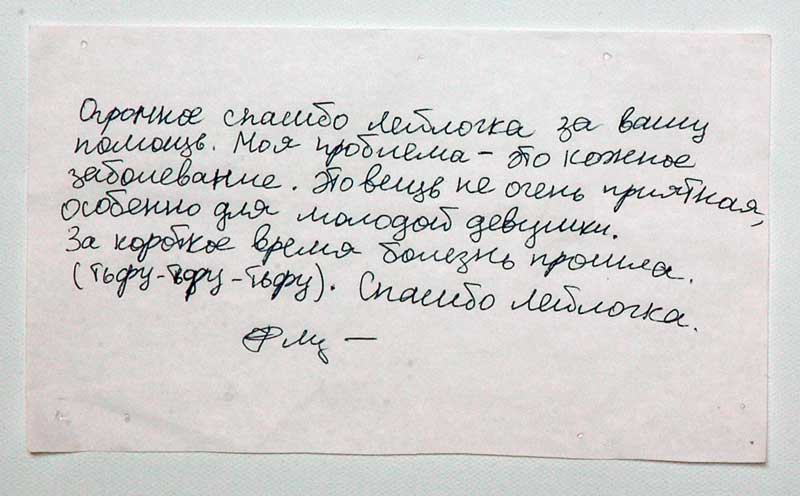 Vorojeya Leila has extraordinary skills in Prophecy and Fortune-telling.
She is a very strong psychic and psychical healer.
Her actively running Psychic School is very successful and popular in Toronto, Canada.

In the late 90s, there seemed to be nothing special in my life. However, I used to worry about my husband and a 12 years old son, and this feeling was getting stronger for no reason. I was afraid to let them go out, I drove my son to school and took him back all by myself. My husband was so tired of my negative thoughts that my parents made me go to a psychiatrist. I started taking strong medications. Nevertheless, the anxiety was still there, just a little bit weaker. In January 2001, my husband and son were coming back from fishing and there was a car accident – a driver of a huge tractor lost control over the breaks and hit them. I lost two my closest people at once – the ones I was living for.

Three years have passed. The grief wasn’t getting any weaker. I was lost in time and space, the life was a burden for me. My old friends paid me a lot of attention, and they gave me this idea to leave everything reminding me of this horrible tragedy.

I came here as a refugee, got the job and started learning English. New country, new people, new possibilities gave my life a new meaning. For about a year, everything was fine, but then I felt the same anxiety again. I didn’t get the refugee status and I lost my job. Coming back from a social worker who told me I wouldn’t get welfare anymore, I decided not to file an appeal or other programs and was only thinking about how to survive here until the deportation. With all those thoughts I took a bus.

A car accident happened once again, and this time it involved me. I had a broken leg and a concussion. It seemed to me that it’s not the end and, against my will, I prepared myself for the worst.

I was lucky to have an extremely kind neighbor. She used to come, cook for me and clean my room. During our talks she was convincing me that everything would be fine and this black period in my life would definitely change to white. When I was finally able to stand, I came right to Leila, following my neighbor’s advice. Leila hugged me and offered me condolences. I was shocked.

While I was there, I felt like Leila was reading my soul – everything that was in my entire life. The mental healer said all my troubles were caused by my cursed ancestors. This curse was passed on me, and if we don’t remove the curse, it would pass further on all my family’s women. All men will die and the women will live suffering. I remember my grandmother’s stories about Stalin’s times, when my grandfather used to work for the secret police and, probably, did the dirty work eliminating “public enemies”. My grandmother used to say that granddad’s horrible death from lung cancer at the age of 36 and my father’s same death when he was only 34, were the results of all the curses from mothers and wives of those victims which were left behind the walls of Stalin camps.

Leila helped me get rid of this burden by praying over the granddad’s sins. She made certain rituals and everything changed so fast – my anxiety disappeared, I met a wonderful man, who gave me sponsorship. We work together and his small business became our common goal. I live and I pray for the health and prosperity of such people as Leila.

It’s been a year since we moved to Canada. My son is 12 years old. He faced difficulties at school right from the start. Probably, it was because of the language. He started cutting classes with another boy who also came here recently. They met some Canadian boy and were spending all the time in his family. His mother was turning my son against me: “What can she give you? When was the last time she bought you what you wanted? She’s only grumbling all the time. She impinges on you as a personality”. Once we had a call from some organization and were told our son refuses to live with us and is suing us for non-pecuniary damage. We were supposed to lose our parental rights. I was desperate. Mu husband heard about Leila from a friend, and we decided to risk. Now our son goes to school and we have warm relations in our family. Thank you, dear Leila, for your wonderful gift and attention!

My sister was on the sevenths month of pregnancy, when she came here to visit me. And then, suddenly, four days before flying to Ukraine, she was in labour. I didn’t know what to do. We had to pay a large sum for labour, as my sister didn’t have any status here. I ran to Leila. We are very grateful for your hard work! Everything went great, and now we have a little Canadian boy! Thank you!

I’ve had psoriasis since I was a child. But lately, it’s been giving me more and more problems. It appeared in such places which I couldn’t hide or cover. My boyfriend left me, following his mother’s advice, who was looking for a rich bride for him. Everything I was starting to do, was failing on half way to success. I felt broken. I was supposed to move to a new house in a month, but the old one wasn’t sold yet. And I couldn’t afford two mortgages. Leila removed the curse from my house and it was sold in three days. My boyfriend came back to me, everything went great, and the psoriasis vanished forever. I take off hat to your incredible gift.

A few months ago, my son lost his job. While sending numerous resume and not having achieved the desired result, he plunged into depression. At the same time, he continued to go to the interview and continued to receive the same answers as : “You are right for us, we will call you back”, but they never called back. In addition, all would be nothing, but recently I began to notice that my 24-year-old son started smoking marijuana. I found cigarettes and grass in his belongings and clothes.

He “barked” at me, saying that this way he separates himself from reality and forgets about problems. Became nervous and easily excitable. He lost the desire to work and, in general, to do something. Leilochka brought us back to life, helping my son, because the greatest happiness for mother is to know that her child is healthy and believes in himself.

Thank you very much!

My son was quite a healthy child. Until his twenties, I could not get enough of him: he studied and helped me. Until he began to perform in the theater. He abandoned his studies, lit up, began to drink. Constant lack of sleep due to rehearsals led to the most terrible: my son began to suffer from epileptic seizures. Nobody had this disease in our family. I was in despair. I brought him to Israel, but even there doctors could not do anything. They gave him pills, but the seizures became more and more frequent. The employee on work brought me an article about Leila. And now I do not know how to thank the Almighty, that he heard my prayers and sent me a sorceress. Thank you so much!

All our lives we have been a hardworking family. Here as well they took a mortgage, bought an apartment. At first, it was not easy to pay, but we coped. Once a cousin of my mother-in-law came to visit us. After her visit, as if the curse came into the house, we began to get very sick, swear and got completely confused in debts. However, that is not all. The apartment was put up for sale, and we had to be evicted, because there was not a penny for the soul. We were already one foot in the street when we turned to Leila. Now everything is great – the curse removed, and our life has entered into the previous channel. Thank you very much.

For eight years I suffered from asthma. Attacks broke out suddenly and could last several hours for 4-5 days. Then they calmed down. Then they arose again, even if I was just frightened.

I was refused several job offers – people didn’t feel comfortable near me. There was absolutely no money left. Leilochka completely rid me of this ailment. She is a very modest person and never emphasizes her capabilities, even in her advertising. And more – I found a job.

My wife always liked to drink. Recently the situation escalated. Lately, when we were at a concert, she got drunk and began to flirt with a familiar man. I tried to take her away, but she withdrew her hand and made a public scandal, calling me in every way possible and shouting that she did not love me anymore. I left alone. She returned late at night, picked up her suitcase and went to visit her mother.

Days passed. My wife did not show up. Soon I received a letter about divorce. I was shocked. Not seeing the way out of this dead end situation, I called Leila. She answered me very nicely, and I felt confidence to meet her. Leilochka returned our family life back to normal and completely saved my wife from alcohol addiction. Thank you!

I’m an old woman while my health is not at its best. More than that my forty-seven-year-old daughter is rude, hates me as a sworn enemy. I didn’t do anything to her it is just Her husband simply left her alone to raise a child. However, this does not mean that anybody is allowed to take the evil out on your own mother. In addition, she screams like an abnormal, cannot talk calmly, wants and asks the Lord for my death, swears with obscene words. This went on for almost two years. Leila not only helped me in my relationship with my daughter, but also added to our success in finance. I do not know how to thank a fortune-teller!

My son is 25 years old. Four years ago, he was in love with a girl who had gone to Canada with her parents. This was a serious trauma for my son. He was in depression for a long time. But six months ago my son met a tourist from Russia and became attached to her. It was an energetic woman who dreamed of getting citizenship in Canada. I urged my son that this woman was not his partner, that she pursued her own selfish goals. After a while, he became convinced of this himself. Soon he broke up with her.

But, suddenly, very strange things began to happen to my son. He lost his appetite, got into a car accident, survived by a miracle, but the car was totally lost. Troubles followed my son everywhere. It was very hard but, I persuaded him to seek help from Leila. It turned out that the former “friend” of my son caused damage to him. Thanks Leila, for helping us get rid of this trouble. My son met a good girl, they have a serious relationship.